Deceptions in the food industry: “all-natural” 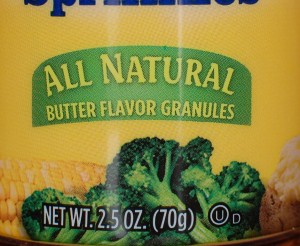 In the first article in this series, Deceptions in the food industry: low-fat foods, I talk about the pervasiveness of processed, low-fat foods in our food supply, misconceptions about how low-fat foods are healthy, and the dishonesty in labeling on these products.

Today I’ll discuss the term “all-natural” on processed, packaged foods and how consuming them can be harmful to your health. As with many products from the commercial food industry, information on the labels or web sites is filled with half-truths, misleading statements, outright lies, or information is omitted completely.

You may see “all-natural” on a Ben & Jerry’s ice cream carton or even a package of 10-year-old chips or crisps. This terminology is not regulated by the FDA. Many of the ingredients are also indecipherable and it can be quite puzzling to understand what they are.  There are numerous non-certified organic foods on the market which claim “natural” on the product labels, and yet these types of products are created with some of the most unnatural methods to produce them.

The FDA does not have a definition for the term “natural”, and explains on its web site that it is defining a food product as natural is problematic because it has probably been processed and is “no longer a product of the earth.” Even then, the agency says it has not objected to the use of the term if the food does not contain added color, artificial flavors or synthetic substances.

Here are some examples of why “all natural” is not what you think it is:

Kellogg paid $5 million in response to a 2011 class-action lawsuit that occurred due to the company’s use of the term “All Natural” on some Kashi products. Plaintiffs objected to ingredients such as pyridoxine hydrochloride, calcium pantothenate, and soy oil processed using hexane, a substance occurring in gasoline.

In 2011 when Wendy’s fast-food chain announced their new “natural cut fries with sea salt”, this product became quite popular.  The potatoes used by Wendy’s most other fast-food chains to make fries undergo at least three unnatural treatments. One is spraying with a chemical called sodium acid pyrophosphate. This keeps the potatoes from turning brown during not one, but two deep-frying sessions – once in the factory, and then again at the restaurant.

Then, dextrose, a corn-derived (think GMO) coating of sugar is used on the fries to help retain color. Finally, to stabilize the frying oil, dimethylpolysiloxane is added. This is a silicone-based chemical food additive which prevents the oil from becoming foamy after repeated fries.

MSG is lurking in this product, marketed as certified organic. Kristen of Food Renegade explains how she made the mistake of thinking this product was safe when she needed to make burgers and fries in a pinch for guests coming to her home.

The ingredient that many consumers may overlook? Autolyzed Yeast Extract, named on Truth In Labeling as one of the many pseudonym MSG goes by … all legally allowed by the FDA!

Here are the ingredients in a chicken and cheese burrito:

Although a number of companies are making strides to make their products cleaner and with less chemicals, this one still falls short. Chicken meat comes from antibiotic-free birds, the poultry are likely still raised in confinement and  consume a GMO-based feed including soy and corn. There are other problematic ingredients in this product including canola oil which is not a traditional fat and is more than likely from GMO canola plants, pasteurized cheese products which are likely from animals raised in confinement and given antibiotics, hormones, and GM-feed. Other ingredients that raise concern include citric acid, which can be a form of MSG and corn starch, likely sourced from GM farming.

With strong opposition from sustainable food communities about toxic sweeteners in our food supply like high-fructose corn syrup, agave has hit the store shelves by storm in the last decade, and is heralded as a “natural” sweetener. One of the most glaring problems with other sweeteners coming in to take the place of harmful ones like HFCS is that in many cases, the alternatives are just as hazardous as the ones they replace.

Agave nectar is not a traditional sweetener. It originates from the large, spiky plant referred to sometimes as Blue Agave in the Mexican region. Like high-fructose corn syrup, the end product is a highly-refined sweetener which is concentrated in…fructose. But wait, isn’t fructose natural and doesn’t it come from fruit? Fructose in fruit doesn’t exist in an isolated form as it does in agave nectar or HFCS.

Metabolism of fructose can also cause increase in triglyceride production, which raises the potential not only for insulin-resistance, leading to the diseases mentioned, which are all components of Metabolic Syndrome. Since the liver expends so much energy metabolizing fructose, this limits its ability to metabolize excess blood glucose, again leading to an increase of blood sugar levels and the need for more insulin. Consuming too much fructose creates a heavy burden on the liver, and then fructose starts to be stored in the fat cells in our bodies.

Read more about the dangers of fructose:

Ramiel Nagel writes: “…a major concern is the high level of free fructose in agave syrups – much higher than honey and maple syrup. Given what we now now about the deleterious effects of fructose compared to sucrose, honey and maple syrup would seem to be better choices than agave for home cooking.”

Sally Fallon Morell, president of the Weston A. Price Foundation says the following about fructose: “We need foods that are whole, not skeletonized and denatured. Sugar, especially sucrose and fructose has been shown to shorten life in numerous animal experiments. Excessive use of sugar is associated with a rise in blood cholesterol, rise in triglycerides, increase in adhesiveness of the blood platelets, increase in blood insulin levels, etc. Numerous studies have positively correlated sugar consumption with heart disease. These results are far more positive than any of the studies linking heart disease and saturated fats.”

Why the term “natural” is misleading:

In 2009, Dean Foods, the nation’s largest organic dairy producer began to produce a line of yogurts labeled “natural”. The intent was to offer products to consumers that were cheaper than organic. The natural line was launched by its organic brand, Horizon. Communication’s manager, Sara Loveday, stated that Horizon had in effect created its own definition of “natural” for its products and, “To us, it means it’s produced without added hormones, artificial sweeteners, artificial colors, flavors, preservatives or high fructose corn syrup. ”

Mark Kastel, senior farm policy analyst for The Cornucopia Institute, a non-profit watchdog group for organic standards commented that this was a good start, “But Dean Foods will not be able to [say] the products are produced without pesticides, herbicides, antibiotics and other drugs or genetically modified feed crops, or that the cows are required to graze in pastures rather than confined to factory farm feedlots,” he said.

Two ingredients you will find in many processed products are autolyzed yeast extract and hydrolyzed protein (sometimes appearing as “vegetable”, sometimes “soy”). Both contain MSG. In fact, there are dozens and dozens of other ingredients in foods that don’t bear the name monosodium glutamate, but which are actually MSG or contain MSG.

If you read the research of Dr. Russell Blaylock, M.D. on substances like MSG in processed foods, you will that these are not naturally-occurring in nature. They are extracted from plants like seaweed or tomatoes which contain free glutamic acid, but are compounded in concentrated amounts. Then, they are engineered in a laboratory which creates an even more potent (and toxic) effect in the food. Its sole reason for existence is not nutrition, but a chemical taste enhancer.

If you eat whole, natural food like seaweed or tomatoes, this is not an issue. The problem is when you take MSG out of these foods – like so many food manufacturers – and synthesize MSG to put it into a highly concentrated form. It then behaves as neurotoxin. Dr. Blaylock’s book,  Excitotoxins: The Taste That Kills (Amazon affiliation) gives a scientifically-based account about the hazards of glutamates in processed foods.

According to the World Health Organization (WHO), GMOs are “organisms in which the genetic material (DNA) has been altered in such a way that does not occur naturally.” Many products in our food marketplace come from foods created with genetically-modified organisms, and there are currently no labeling laws in the U.S. to alert consumers about genetically-modified substances.

Can you imagine what would happen if GM products were labeled? You’d walk into a store and the majority of what’s there would bear those labels. Would you willingly buy these products? Some people might, but I believe many would avoid. Unless a product has the Non-GMO label, the chance of genetically-modified organisms being included in that product is high.

From the Institute for Responsible Technology,  a world leader in educating policy makers and consumers about genetically-modified (GM) foods and crops, commercialized GM crops in the United States include:

According to the Institute for Responsible Technology, the following health issues can arise as a result of consuming GMO foods:

The bottom line in finding real, whole foods without chemicals, additives, preservatives and other health-altering substances is to ask yourself when you are thinking about buying: is this product something my great-grandmother would have eaten? If so, it may be worth buying.

Another question to ask is: is there a list of ingredients on the product in question that seems indecipherable? If you don’t recognize the ingredients, it may be time to reconsider your purchase.

Does this mean spending hours in the grocery store reading labels to avoid these products?

Actually, there are some simple solutions, and they involve knowing where your food comes from.

One way to start is to take an interest in making foods from scratch at home, and eliminate boxes of bouillon, cans of soup stock, sauce and seasoning mixtures, bottled salad dressing, and other packaged and pre-made foods.

Another way to understand your food is to visit your local farmer’s market and ask questions about how the food is produced.  For example, in raising meat, does the farmer use antibiotics or hormones? Are the animals on pasture or are they fed something supplemental such as grain, soy or corn? Are those supplemental feeds genetically-modified? Does the farmer use pesticides, herbicides, or chemical fertilizers to grow his tomatoes, squash, or apples? These are all important questions to consider when sourcing safe and nutritious food.

Many of these products end up on recall lists and the assumption some might make is that by switching to another brand, problems can be avoided. The truth is, most packaged foods and pre-made products are likely to be found on a recall list eventually. Practices used in the industrial food system are typically the reason why food products show up on recall lists in the first place.

Avoid processed foods altogether and buy real, whole, organic foods that are sustainable-produced from local farmers you trust.  Read this article explaining some differences between processed and real foods.

Seeds of Deception by Jeffery Smith

The Unhealthy Truth by Robyn O’Brien

Read other articles in the Deceptions in the food industry series: