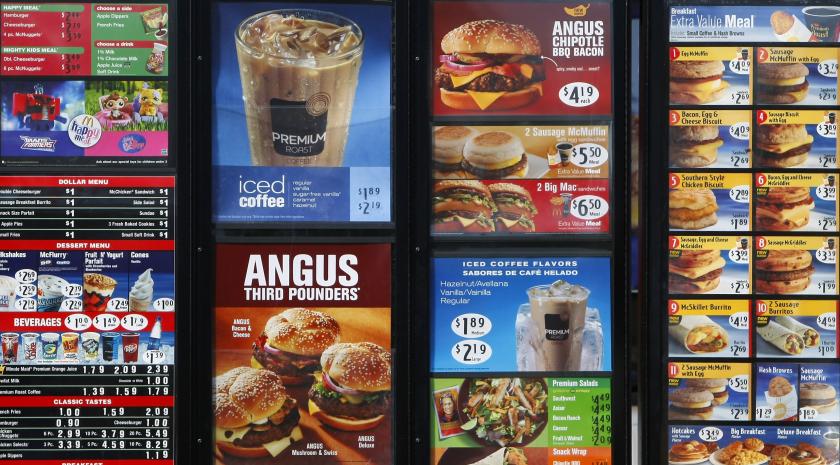 When shopping for food, do you purchase whatever is on the shelf? Or, do you consider what’s in the food you eat and how it is produced before buying?

Where your food comes from is just as important as making something at home from scratch. The ingredients and how they are produced say a lot about just how healthy that food really is.

When you go to the grocery store or out to eat at a restaurant, consider the following about the majority of food sold and served:

Supporting industrial farming keeps corporations going which have a track record of damage to health and environment. Dollars spent in the industrial sector don’t support smaller, family-owned farms whose goal is to produce healthy food that preserves our health and the environment.

When you buy sustainable food from small-scale producers, you support local communities and healthy farming practices. The amount of fossil fuels used to transport these products is reduced, and the overall CO2 emissions into the atmosphere are lowered as well. Read more about the benefits of organic agriculture systems from California Climate and Agriculture Network.

Although conventional medical recommendations tell us to stay away from saturated fats and red meat, grass-fed beef, eggs, and dairy do not clog our arteries. Unlike their factory counterparts, pastured animal foods contain CLA (conjugated linoleic acid, an important antioxidant), Omega 3s, minerals, Vitamins A, D, E, and K2.

Read an interview with Dr. James Carlson, M.D., a board-certified family physician, osteopath, and clinical biochemist from the Weston A. Price Foundation site.

The process of grazing a herd of cattle on open land and moving them around from pasture to pasture on a day-to-day basis allows regeneration of the land as well as replenishment of nutrients in the soil and grasses. This type of farming actually encourages the health of top soil – one of the most critical areas of the environment which has a profound effect on health. When farmers work with the land to encourage natural biodiversity and development of microrganisms, the result is a win-win situation for all involved, the land, humans, and animals. Organic Grass Fed Beef Info thoroughly explains the vast differences between how  grass-fed animals and grain-fed animals are raised.

Scientific research shows that sustainable, pasture-raised, and organic foods provide significant health benefits for consumers. In addition to being raised without synthetic hormones, antibiotics, pesticides and chemical fertilizers, sustainable meat is more nutritious than meat produced by industrial agriculture for the reasons discussed above.

From a joint study conducted by CDC scientists, the University of Washington, and Emory University, results reveal that pesticide levels in test subjects dropped to undetectable levels upon switching to an organic diet. When the subjects switched back to a non-organic diet, pesticide residues almost immediately became detectable. (Schafer S., Kristin, et al. “Chemical Trespass: Pesticides in Our Bodies and Corporate Accountability.” Pesticide Action Network of North America, May 2004)

Many health problems have been attributed to the consumption of these so-called foods, and yet the distinction is seldom made. Toxins and chemicals in our food supply are responsible for the appearance of earlier degenerative diseases than in the historical past.  Body Ecology provides a description of toxins in the products we eat and drink and those both in and outside of our bodies.

What are the hidden costs of cheap food?

Here is a comparative analysis of several processed foods versus a real, whole food free from chemicals and other toxins typically found in industrial food from Windy Ridge Poultry, in Alfred, NY. The Windy Ridge Farmer has displayed this chart for customers to view at his farmer’s market booth: 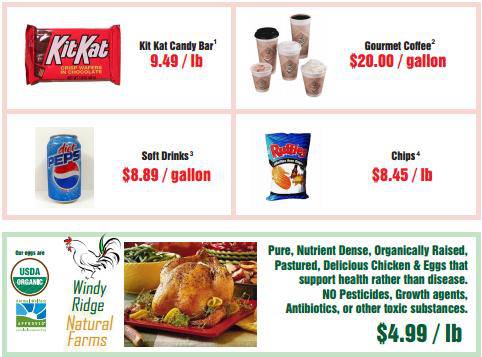 Switching to natural, organic, and grass-fed foods seems expensive on the surface, but when you consider health problems that can occur as a result of consuming processed foods, not to mention costs incurred on health care, environmental, and tax systems we pay for directly out of our own pockets, doesn’t it seem worth it to spend more now and save later?

Industrial food may have a cheaper price tag at the store, but the long-term repercussions of eating this way for an extended period of time will amount to a higher price tag in the future in more ways than one: you’ll pay with your pocketbook and your quality of life.

Read more about the hidden costs of industrial food from Briar Patch Co-op and Civil Eats.

To learn more about factory farms, visit The Food & Water Watch web site. Here’s the factory farm list for every facility in the country by state.

Join up with the Millions Against Monsanto Campaign to help preserve the environment and health.

Have you switched from processed to real food? What changes have you noticed in your health?