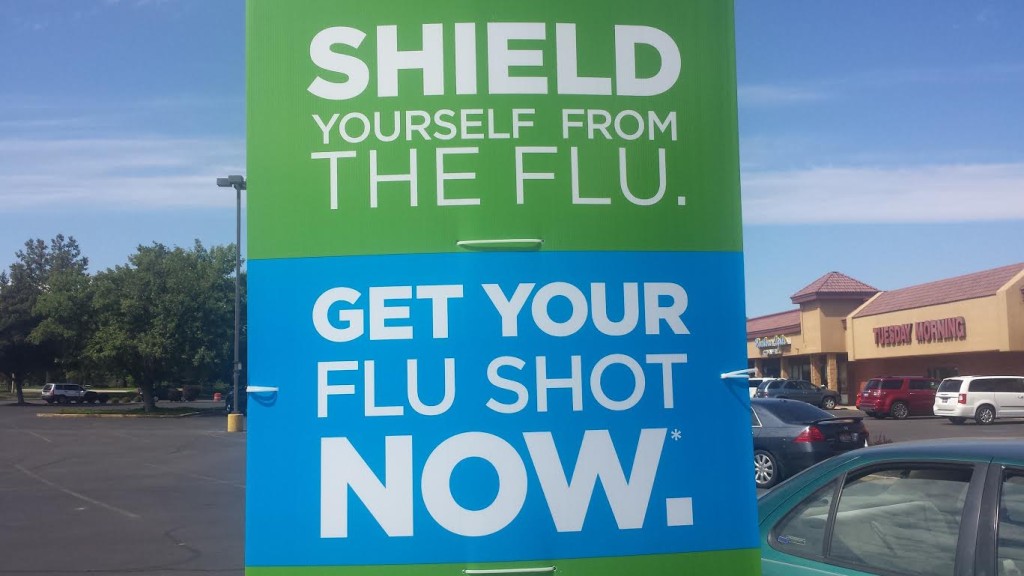 It’s that time of year again. I’ve been seeing the signs “flu shots here” from Walgreens to doctor’s clinics. And I hear conversations from people everywhere saying that they need to get into their doctor and get their flu shot before it’s too late.

So why is there so much hype about the flu vaccine? Does the flu shot really keep us from getting the flu?

No real evidence exists about flu shot vaccines being beneficial for anyone. Before the use of the flu vaccine, two of the major reasons why deaths from flu and pneumonia declined by 90 percent around the turn of the century (1900) was due to dramatic improvements in sanitation practices (plumbing and electricity) as well as improvements in nutrition.

One thing is for certain: no one in my family will be getting the flu shot this year or anytime in the future. I don’t think many people would argue that getting the flu is unpleasant … but should you come down with the flu and your body can fight it off without using drugs, you will gain natural immunity.  If you support your body and take precautions by eating a nourishing diet and making non-toxic lifestyle choices, you probably won’t have to worry about the flu much at all. Here’s why:

No evidence the flu shot is effective

In 2004, The National Vaccine Information Center cited that the vaccines did not actually contain the flu strain that caused most flu outbreaks occurring that year. In that same year, the Lancet published a study showing no correlation between the flu shot and the decreased risk of contracting pneumonia.

A large, systematic review of 51 studies which used 260,000 children ranging in ages from 6 to 23 months found no evidence that the flu vaccine is any more effective than a placebo. Each year, current shots are only able to “protect” against specific strains of the virus, produced from last year’s virus in a laboratory. If you come into contact with a different strain, you are very much vulnerable to catching the flu.

It is common for people to come down with flu symptoms after getting a flu shot. This is because the flu shot contains some of those antigens to cause your body to produce an artificial reaction to the virus. The vaccine actually damages your immune system since it bypasses airborne, topical (through the skin), and the digestive system – the natural and permanent methods of gaining immunity – caused by toxic ingredients in the vaccine triggering a super-reaction in the immune system.

The CDC web site openly admits that the flu shot may not be effective:  “During years when the flu vaccine is not well matched to circulating viruses, it’s possible that no benefit from flu vaccination may be observed.”

More reports reveal that the flu vaccine is increasingly ineffective: TODAY. The doctor interviewed recommends taking flu medications at first onset of symptoms, and to everyone who experiences these symptoms – not just high risk groups.

Other reports show that the flu vaccine has actually exacerbated the problem or caused death in some individuals.  From Health Impact News, a review of quarterly reports of vaccine compensation show that the majority of court cases paid out by the government were to those administered the flu vaccine.

The research of Dr. Russell Blaylock, M.D. shows damage to the immune system and brain

Dr. Russell Blaylock, M.D. found in various neuroscience studies a strong link between vaccination and brain inflammation, which can go on for years or decades. Much of conventional medical science mistakenly believed for years that the brain is granted protection from immune activation by the special protective blood-brain barrier. Since then, more recent studies discovered that immune cells enter the brain directly, and also that the brain’s own special immune system becomes activated by vaccination. This special immune system functions due to the activity of a unique cell known as the microglia. These types of cells are found all throughout the brain and exist in dormancy until activated. In this case, the most critical stimuli to activate brain microglia (which triggers the body’s immune system) is through vaccination.

Once activated, there is no way to separate activation of the brain’s immune cells. The stronger the immune response, the more the brain’s stimulation continues. As long as the primary immune system is stimulated, so is the brains’s immune response. When this occurs, powerful, inflammatory excitotoxins and cytokines are mobilized which produce brain damage – similar to encephalitis.

This is the same type of reaction seen with various other vaccines which leads to seizures, autism spectrum disorders, and encephalitis in children. Recommendations from both the American Academy of Pediatrics and the American Academy of Family Practice have included vaccinations for children including newborn infants and also yearly flu shots for both children and adults. The list for required vaccinations is growing year by year, and according to the CDC, currently is nearly at 60 different vaccines before the age of 6 years.

In mature and older adults, studies are linking vaccinations to diseases such as Parkinson’s disease, Alzheimer’s, dementia, and ALS.

In 2013, a report from the Department of Justice, shows figures for compensation made by Health and Human Services for those injured or killed by vaccines.  “There were 139 claims settled during this time period, with 70 of them being compensated. So, just over 50% of the claims filed for vaccine damages were compensated during this period. Of the 70 cases compensated, 42 of them were for the flu vaccine, or 60% of the cases settled where compensation was awarded for injury or death due to the vaccine. The combined total of the other 40% of cases settled included the following vaccines: Hep B, Tetanus, HPV, DTaP, MMR, IPV, PCV, Hib, Meningococcal, Varicella, TD.”

Excitotoxins: The Taste That Kills

What ingredients are included in the flu vaccine?

Claims have been made by various sources that the new 2010-2011 flu vaccine is mercury-free.  Even if mercury were no longer included (which it still is in many vaccines).

In addition to these ingredients, flu vaccines also contain various antibiotics such as neomycin, polymyxin B and gentamicin. These are included to eliminate stray bacteria found in the mixture. Research shows that antibiotics destroy beneficial bacteria necessary to maintain health. Antibiotic drugs decrease the immune system’s functionality and cause the overgrowth of candida, which also suppresses the immune system.

There isn’t any way you will ever convince me that injecting those things into mine or my child’s body is safe, no matter how many medical studies prove otherwise. It’s important to keep in mind that many of those studies showing favorable results are actually funded by the drug companies and special interests who are pro-vaccine.

When our bodies become too toxic, they attempt to ‘detox’ these substances out. The real cause of influenza is the body’s ability to remove toxins from the foods we eat and from the environment around us. When we eat processed foods and substances that are unrecognizable by our digestive system (difficult to digest), and if our digestive system is compromised and unable to digest healthy foods, the severity of flu symptoms will be stronger. Levels of toxins in the body versus the amount of available nutritional elements (such as Vitamin A, D or Vitamin C) are the primary components to determine severity or success of the cleansing process which we know as “flu symptoms”.

According to the Weston A. Price Foundation:

“Vaccine failure and failure to acknowledge that live virus vaccines can spread disease have resulted in an increase in outbreaks of infectious disease in both vaccinated and unvaccinated individuals,” says Manookian, “CDC should instruct physicians who administer vaccinations to inform their patients about the risks posed to others by those who’ve been recently vaccinated.”

Dr. Anthony Samsel has also recently discovered that many vaccines including the flu vaccine contain Glyphosate, the active ingredient in Monsanto’s herbicide Roundup. Glyphosate is bioaccumlated into the bone. Watch these two videos, Part I and Part II.

Here is a link to Congressional Hearings on the topic of Glyphosate, with presentations and papers from Anthony Samsel, Dr. Stephanie Seneff, PhD, and Dr. Thierry Vrain, PhD, and other experts in the field.

What causes the flu?

Our bodies are full of bacteria and some viruses. We always have some bacteria inside us that isn’t beneficial.  Our bodies also harbor viruses, even inactive ones. When our bodies become weakened from lack of nutritional and lifestyle support, we become vulnerable to illness. Think about what happens when you don’t eat right, don’t get enough sleep, succumb to stressful events (which sometimes pile up), don’t get enough vitamin D from the sun, and then are exposed to a person who has flu or cold symptoms. Do you think your body will be in its best condition to ward off bacteria that might cause you to also come down with those symptoms? Chances are much greater if you have not been able to take care of yourself optimally.

Even if you don’t think you’ve been exposed to someone who is ill, if you aren’t supporting yourself optimally, you can still succumb to illness and develop cold and flu symptoms.

According to a CBS News study, when you experience fever, cough, runny nose, congestion, sore throat and other flu or cold symptoms, the illness is likely caused by influenza only 17 percent of the time, and as little as 3 percent, at the most. The other 83 to 97 percent? You are actually experiencing symptoms from some other type of bacteria or virus!

Natural ways to avoid the flu

Flu vaccines and medications aren’t recommended to protect your body and support your immunity. Instead, eat healthy, real foods with live nutrients, enzymes, vitamins and minerals, which goes a long way toward prevention of and minimizing flu illnesses:

Besides a nourishing diet of foods listed above, reducing stress and increasing the amount of sleep and rest you receive, here are some other suggestions for supporting your body through any kind of illness:

What natural ways have you found to avoid the flu and colds, or support your immune system to recover more quickly?