The GAPS Diet for insomnia, panic and anxiety 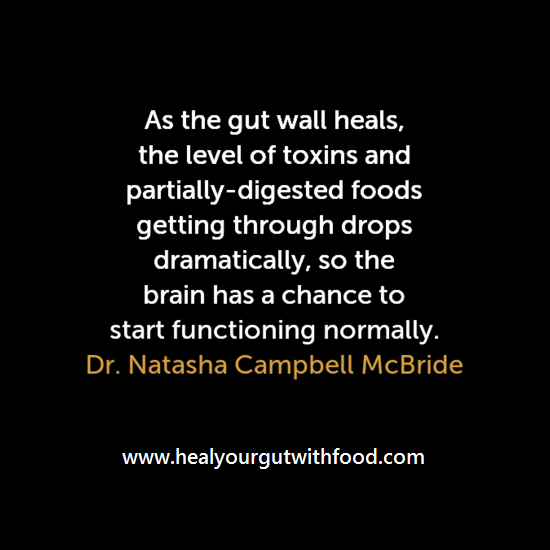 I want to share my experience in using GAPS for recovery from long-standing health issues I experienced for over 20 years of my life: insomnia, panic and anxiety.

GAPS is a healing protocol developed by Dr. Natasha Campbell McBride to correct digestive compromise and nutritional deficiencies in the body as a result of poor lifestyle and dietary habits. Dr. McBride’s groundbreaking book, Gut and Psychology Syndrome is one I highly recommend everyone and anyone read, via my Amazon affiliation.

I sincerely believe my experience is of particular relevance and importance for many, as the statistics on numbers of individuals taking medications for these and related disorders are concerning:

What do those statistics tell us?

I think they say something significant about how we view health: That our focus is not on finding the cause, but dependence upon chemicals to suppress symptoms.

I believe it also shows something else: Those medications aren’t curing symptoms, they are simply managing them.

I would guess those numbers may be inaccurate, and are low due to the fact that not all incidences are reported.

I never wanted to rely on drugs for anxiety, or any other health issue. But at least a few times before I resolved my issues with food, I became desperate and took them.   What I learned was that those drugs didn’t solve the actual cause of the problem. In fact, my situation only became more dire while taking those medications.

How GAPS helped me

Prior to starting GAPS, our family was experiencing a great deal of stress and I was working long hours without taking breaks in front of the computer.  Initially, I didn’t believe I needed GAPS because in theory, my diet was very healthy.  After all, I had removed processed foods years before and was eating a variety of real foods, so how could I possibly need it?

By April 2011, I decided to it was time to try this protocol since I had not been sleeping for over 3 months. During that time, I experienced some of the most acute insomnia, panic and anxiety symptoms I’ve ever had. It is not an exaggeration to say that my level of sanity during those preceding months was very much on the edge, and I was a complete wreck. On many days my head was full of thoughts of ending my own life. I was desperate and tried everything I could  to bring myself relief from racing heart, constant jitters or feeling of internal shaking, extreme fatigue, constant thoughts of doom and sadness, diarrhea, chills, and difficulty breathing.

I consulted with many different holistic-minded individuals and practitioners, and received a lot of different opinions. One person told me I was suffering from heavy metal issues, another from thyroid problems. I was told by yet another that I wasn’t absorbing the nutrients from the foods I was eating.

I also had some long-distance and online conversations with a few friends to whom I am forever grateful for their balanced advice and suggestions. I so appreciate those who reached out to help during that time, and especially to those who reinforced what I already knew: that there was very likely some truth to all of the diagnoses I received, but that most importantly, I could use food to heal myself and eliminate most, if not all, of the supplements I relied upon.

Although I had eliminated processed foods and was eating real foods each and every day, what I hadn’t taken into account was that for years prior to this episode, our family had been under a tremendous amount of stress. That stress had a profound effect on my health.

In 2009, my husband was laid off from his programming job and we decided to use our retirement savings to open a solar business. The business was my husband’s dream, and we both really wanted it to succeed. As anyone knows who has started a business from the ground up, the process of getting that business off the ground is no small task. Our situation was complicated by challenges including online theft and fraud, and a breach of contract when our business partners abruptly dissolved our contract with no communication before, during or after the event about responsibilities.

Throughout my life I have dealt with chronic insomnia and panic. I spent years in my teens, 20s and 30s seeking the advice of conventional doctors who told me “nothing was wrong”.  Even though “nothing was wrong”, I was frequently recommended to take anti-anxiety medication.  The idea of prescription medication always terrified me because I worried about becoming dependent, side effects … and my biggest fear was that ultimately, the cause of the problem would remain unsolved.

I would later discover that these were signs of underlying overall health issues. When combined with stress and not getting the nutrients I needed in the proper amounts and correct form, my body began to tell me something was wrong. I was trying to listen, but I wasn’t understanding the language my body was using.

What GAPS did for me

After 3 months of effort, no holistic practitioners I consulted were able to help.  Within 5 days of starting GAPS, I was getting more sleep than I had in months. Within about 6 weeks, I was sleeping through the night again, uninterrupted.  I’ve never had such noticeable and dramatic results with any other effort or protocol I’ve ever done.

Since most people have digestive issues, I believe this is a major culprit of many health issues. If we can’t digest the food we eat – even if it is real, healthy food – this presents a challenge in overcoming health problems since we need the nutrients in those foods to heal our bodies. GAPS addresses those issues by providing the most nutrient-dense foods in the easiest-to-digest forms.

It has become very clear to me that the answer for health problems is not in supplements – and certainly not medications – but in a real food diet, stress management, getting out in the sunshine, adequate rest and relaxation. I truly believe now that nothing we experience is ever caused by just one factor, but many different things going on around us. I’ve also learned that we cannot underestimate the effect stress has on our bodies.

My results on GAPS enabled me to overcome chronic health issues including panic, anxiety and insomnia which controlled my life for over 20 years. Never again will I doubt the power of healing foods and recognizing when stress has done damage.

Although I have not observed a wide range of discussions about those who have resolved panic and insomnia issues with GAPS, I believe this is a remarkable discovery and hopeful solution for those who suffer from these chronic conditions.

I took supplements for many years, believing these were the answer to my problems.  However, supplements are difficult to absorb as they often contain synthetic nutrients, or those that are not in the most bio-available form.  Many products also contain fillers and other ingredients that can be toxic. I’m not saying all supplements are harmful, but if you use them, be very certain that you actually need what you take, and that you are eating the healthiest diet possible.

Sometimes even with a healthy diet, because of pre-existing health issues, the possibility of mineral depletion from our soils due to a predominance of chemical farming, and pollutants in the environment and food, even this might not solve the problem.

Based on my body’s response to the GAPS Diet, I realized I was depleted in the nutrients found in these foods. I also realized the supplements I had taken for years may not have been doing what I needed.

Dr. McBride talks about taking supplements as close to real food as possible, and in liquid form as one of the best choices for absorption.  Liquid nutrients from real food can be absorbed easier, and the foods included on the GAPS diet: fresh-pressed juices, broths, soups, stews, cultured dairy foods, and fermented vegetable juices fit that description.

Many products claim to be potent, safe, easy to absorb, and high quality. From my research and experience, reliance upon supplements rather than food may not solve underlying nutritional deficiencies on its own, can be a source of liver toxicity, and can make matters worse by contributing to the body’s overall toxic load.

I believe this is why GAPS works for many individuals, and why it worked for me: the diet provides necessary nutrients needed by the body, and in the most digestible format possible: through broths, fermented foods and beverages, juicing, healthy fats, and well-cooked vegetables and meats. GAPS may not be the answer for everyone, but it worked for me.

My GAPS/Weston A. Price interview

I was asked to do an interview with my friend Kim Metez who was the producer of a weekly show called Chew On This, featured on Radio Boise, a local, independent radio station.

Our interview focuses on the importance of real food with an emphasis on how the work of Dr. Weston A. Price revealed the impact of traditional diets eaten by isolated populations of people all over the world, as well as the GAPS diet.

Here are parts I and II of our interviews:

Part I of my GAPS/Weston A. Price interview with Kim Metez of Chew On This

Part II of my GAPS/Weston A. Price interview

I also did an interview with Starlene Stewart of GAPS Diet Journey. Listen to this conversation here.

I can say with absolute certainty that GAPS is effective for more than just digestive issues, food allergies, chronic infections, skin problems, and fatigue. Just as the name implies – Gut and Psychology Syndrome – this protocol really can get to the root of so-called “psychological”, “anxiety”, and “emotional” issues.

Dr. McBride talks in detail about how the GAPS syndrome encompasses conditions such as depression, hyperactivity, ADD, and even schizophrenia. From my own experience, it makes perfect sense that it would be useful for those suffering with insomnia, panic, and anxiety, and related issues as well.

Have you experienced panic, anxiety, or insomnia? What steps did you take to address them?